Explained variance of Y in splsda

I know some questions were very close to the one I am asking, but I haven’t found the exact answer I am looking for.

Could you please help me explain this? 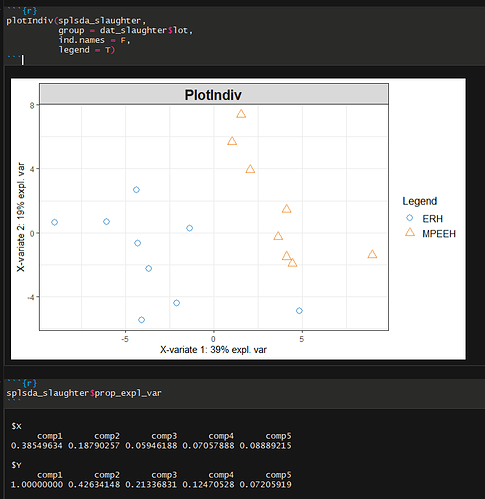 After doing some thinking and some reading, I think I’ve determined the cause of the explained variance equaling 1 for the first Y component.

In your scenario, the Y dataframe is a represented by a single variable (0 or 1 for each class). As far as the method is concerned, this is considered its own “block” - in the same way your various X blocks are treated.

Now when we try to do the same for the Y block, there is only a single variable to generate a component from. Therefore, it just uses this component as is (sometimes flipping the sign), so the resulting loading will just be 1 (or -1). Hence, when calculating the explained variance, the original Y data and the first Y component are essentially identical, meaning the proportion of explained variance is equal to 1.

When calculating the explained variance for subsequent Y components, the process is a little more complicated and subject to few different requirements. Hence, the second (and further) components are not identical to the Y vector, resulting in an explained variance value lower than 1.

Hope this clarifies things a bit

Thank you @MaxBladen , it is clearer to me know, and explains the problem I had with this output