I know, from Tenenhause & Tenenhause, 2011 and from Tenenhause et al., 2014, that RGCCA, from which SGCCA derives, employs an approach from PLS which allows it to indicate the degree of conection between the different blocks of data.

Here I paste a picture of the equation I am referring to:

Thank you very much!

I’ve been doing some digging through the mixOmics source code to answer your questions, @Jeni. Here’s what I’ve found:

Thanks for your answers!

Regarding 4. I was trying to understand that loading vectors and component scores are calculated from the equation shown in the figure. However, this equation comes from SGCCA. So, in which part of the equation is PLS involved?

I think this passage may help. Note the first line of the first paragraph: “[sGCCA], which contrary to what its name suggests, generalises PLS and PLS-DA for multiple, matching data sets”.

As a result of that, you may ask why the CCA acronym is used rather than PLS in the available resources. Within mixOmics, “sGCCA” uses the PLS algorithm to decompose the input data, but algorithms from the rGCCA package are utilised to deflate the dataframes. Refer to ** at bottom for explanation of deflation.

I don’t know why it was named as it was, but sometimes in these resources sGCCA is used this way. I definitely see how the language of some of the available resources are potentially confusing. 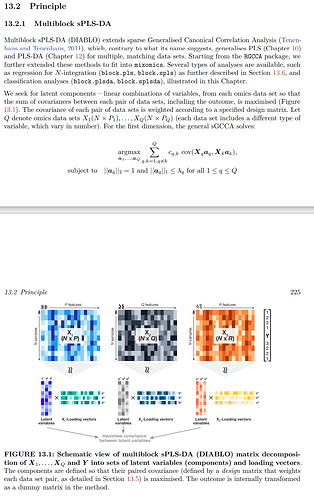 ** This algorithm constructs its components in an iterative manner. That’s why we can have first and second, etc, components, as they’re calculated one after the other. Upon completion of a component, the input dataframe is “deflated”. This is the process of removing the variability defined by the component from the input dataframe. It aids in reducing the correlation between components of differing counts (eg. component 2 and 3 in a block are unlikely to be high correlated. When comp 3 is calculated, the information of component 2 is not found in the dataframe anymore due to deflation).