Generic questions about DIABLO: perf, keepX and no variable selection

I am hoping to use the mixOmics package developed by you and your team. I am trying to learn how to implement mixOmics, specifically the DIABLO method, for trial datasets my lab has produced (~5000 proteins, ~800 metabolites).I do have a few questions which I hope will not be much of a bother to you. Apologies in advance for any banal questions, I am still quite new to bioinformatic analysis.

Thank you again for your help!

Afternoon! Absolutely no apologies required. Took me quite a while to get my head around everything. I’ll answer all these questions in relation to DIABLO specifically to keep this focused.

I hope these answers cleared up your queries and feel free to post here with any more questions.

Max, good morning. Shouldn’t it be possible to display a circosPlot of a block.plsda by setting a high cutoff? That way maybe it is viewable. I tried it and the R package doesn’t allow me to do it. It is strange because in the book it is clear that it does. Greetings and thanks!

circosPlot does not currently support the usage of block.plsda objects. Just use block.splsda but don’t supply keepX at all, meaning all features will be used - essentially mimicking block.plsda. 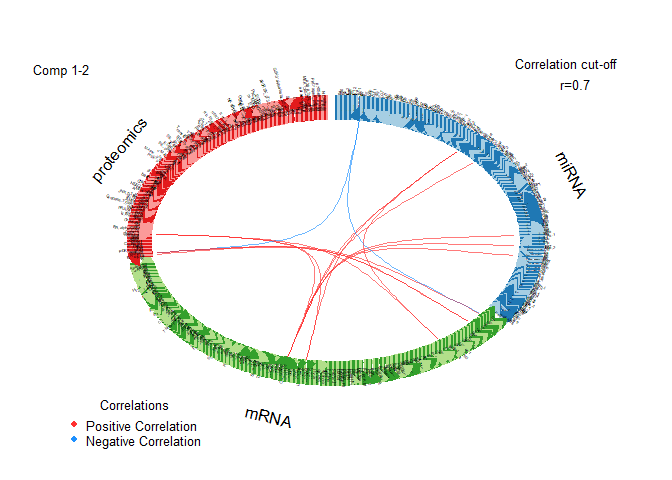 Why don’t you recommend to specify keepX when performing block.splsda?

@Jeni that is just a workaround as circosPlot() doesnt yet fully support taking block.plsda objects - so we can use a block.splsda object, but not set keepX, so that all features are used. In this case, block.splsda is equivalent to block.plsda